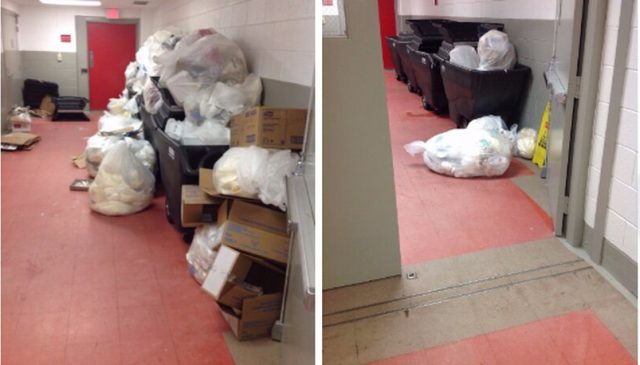 The International Campaign to Free Kamau Sadiki Now! is publicizing the results of the investigative reporting by the Atlanta Georgia Constitution in digestible pieces on our blog and social media. Read their first article and see the shocking photos.

Oct 21, 2017,
Reprinted from the Atlantic Journal-Constitution
An AJC Investigation,
By Danny Robbins.

Bags of garbage have piled up outside the operating room, attracting flies and mosquitoes. During surgery, dealing with the insects has become one of the occupational hazards for doctors and nurses.

Mold has contaminated the ceiling in the dental unit and a wall in a second-floor corridor of the hospital.

In the dialysis center, water has dripped under the sink into containers put there to catch it, and the chairs are so battered that they can’t be properly disinfected.

At Augusta State Medical Prison, unsafe and unsanitary conditions have persisted for weeks, months or years, putting inmates, doctors and others at risk. Even plaintive calls for help have been ignored.

Documents and photos obtained by The Atlanta Journal-Constitution show that the Grovetown facility, the flagship of Georgia’s correctional healthcare system, is a place where state officials have allowed hazards to slide. Trash, mold, dirty floors and counters, leaking ceilings, and congested corridors are just some of the issues detailed in the documents, including emails and an environmental survey, that have flagged top officials to the problems.

The garbage in the hallway outside the operating room, a situation rife with the potential for infection, wasn’t resolved as of last week even though the facility’s medical director earlier this month wrote an email to her superiors expressing frustration.

“I am incredulous that such a discussion is still needed to address the problem within a facility that provides health care,” Alston wrote. “Simple solution: stop placing garbage by the OR now.”

Other potentially dangerous problems weren’t addressed despite years of warnings.

The annual environmental health and safety survey of the hospital in July discovered another serious health hazard — so-called black mold — and noted that the fungus would continue to develop unless several leaking ceilings were repaired.

Four ceilings had water damage, including two that hadn’t been fixed since they were identified as problems a year earlier. One of the damaged ceilings that hadn’t been repaired was in the operating room, the other in the pharmacy.“

“These areas are affected whenever it rains,” the inspector, Jeff Speer, wrote. “Continued water intrusion will significantly increase the potential for mold to develop in these critical areas.”

The survey also found that operating room corridors were crowded with equipment and supplies, a fire hazard that also existed in 2016.

Adding to the danger, fire extinguishers by the doors had not been inspected monthly, a requirement to ensure they will work if fire were to break out in the 34-year-old facility, which has 55 hospital beds and the capability of housing more than 1,300 inmates. Inspections found the same problem in 2014, 2015 and 2016.

Responsibility for managing the medical side of the facility, commonly known as ASMP, belongs to Georgia Correctional HealthCare, the branch of Augusta University contracted by the Department of Corrections to provide healthcare services. The prison itself is in the hands of the GDC.

In an email to the AJC Friday, a GDC spokeswoman, Gwendolyn Hogan, said the department was aware of the problems with the garbage and mold and both had been “resolved.” She said the water leaks are being “assessed by engineering.” The email provided no details.

“While GCHC specializes in the provision of healthcare, we appreciate the challenges associated with the maintenance and repair of older facilities and continue to partner with GDC to create a safe environment for our patients,” she wrote in an email.

Experts in hospital sanitation said the issues at ASMP are unsettling, particularly if insects have invaded the operating room.

“That’s something of real concern,” said Andrew Streifel, a hospital environmental specialist affiliated with the University of Minnesota. “If the hospital is conscientious, it will do something about this.”

The garbage problem outside the operating room has existed at least since mid-August, according to photos obtained by the AJC. The photos show garbage bags and empty boxes filling portable dumpsters and spilling onto the floor. At times, the bags almost reached the ceiling.

On Oct. 6, Alston wrote a widely-distributed email to complain. Among the recipients were Dr. Billy Nichols, the statewide medical director for Georgia Correctional HealthCare, and Dr. Sharon Lewis, the DOC medical director.

In the email, obtained by the AJC through an open records request, Alston noted that a suggestion had been made “many weeks ago” to dispose of the garbage elsewhere on the ASMP grounds, but no action had been taken.

“Meanwhile, this practice continues,” she wrote. “It is an unacceptable practice and it needs to change immediately; no discussion.”

Later that day, Lewis responded with a single sentence: “This must be remedied immediately.”

However, photos provided to the AJC during the middle of the past week showed trash bags still outside the operating room and, in one instance, an unknown fluid leaking onto the floor.

Complaints have also been made by another ASMP physician, Dr. Timothy Young, regarding a lack of orderlies to clean one of the hospital clinics, emails obtained through the open records request show.

“The filth that is accumulating … is not conducive to sanitary patient care,” Young wrote in one of his emails to Nichols and other officials.

The mold problem was one of 12 deficiencies discovered by Speer, working for Augusta University’s Environmental Health and Safety Division, and detailed in a report to officials with Georgia Correctional HealthCare on Aug. 31.

Testing later identified the mold as Stachybotrys, a type that grows in moisture and can be harmful, particularly for people with compromised immune systems.

The survey identified numerous factors that could have allowed the mold to develop, including the four leaking ceilings and humidity that ranged beyond acceptable levels.

As a course of action, Speer recommended an independent inspection “to determine the extent of the mold contamination above and below the ceilings in all areas subjected to the chronic water intrusion.”

Experts in mold remediation said getting rid of mold of the type discovered at ASMP requires complete removal of the wall or ceiling where it’s growing and then vacuuming and sanitizing the area.

“If you have a room with four feet of mold on one wall, you generally would clean the entire room,” said Tom Peter, an industrial hygienist whose New Jersey company specializes in removing mold from high-risk environments.

Streifel, who has spent nearly 40 years investigating infection-related issues in healthcare facilities, said he rarely sees Stachybotrys in hospital settings because most are kept clean enough to avoid it.

“It’s usually a condition of a long-neglected leak, something that hasn’t been fixed for a long time and just keeps dripping,” he said.

The leaking sink in the dialysis center was also identified by Speer as a problem that had been cited a year earlier and not been repaired. In addition, the inspector determined that damaged upholstery on the chairs in the center — which is managed by a private company, CharDonnay Dialysis Inc., of Danville, Ill. — would prevent proper disinfection.

The company did not respond to an AJC message asking for comment on these issues.

A July inspection at Augusta State Medical Prison found a dozen deficiencies, some of which had persisted for years. The deficiencies create fire hazards, impede medical care and put the staff and inmates at risk of dangerous infections.

Leaks in the hallway ceiling hadn’t been fixed despite also being red-flagged in 2016. “Continued water intrusion will significantly increase the potential for mold to develop in these critical areas,” the report warns.

The OR corridors were crowded with equipment and supplies, a significant fire hazard that has existed since at least 2016.

Fire extinguishers by the doors were not inspected monthly, a repeat finding from 2014, 2015 and 2016. Healthcare facilities are required to inspect, test and maintain the extinguishers to ensure they will work as intended against fires.

The wall in one of the operating suites was damaged by the door and the vinyl barrier compromised. The report cites recommended standards for cleaning that minimize exposure of patients and health care personnel to potentially infectious pathogens.

Chairs cannot be properly disinfected because their upholstery is damaged. That can spread infections. Since 2016, a sink has been leaking. Open containers were placed under the sink to catch the water.

The ceiling is contaminated with Stachybotrys mold, a greenish-black fungus that can create potential health risks. Excessive moisture allows the mold to form. Water damage was found in the clinic’s ceiling.

Soil has built up on the counters and floors in some parts of the clinic.

Since 2016, the pharmacy ceiling has had water stains and continues to get wet whenever it rains, increasing the risk of mold.

Humidity is high in the pharmacy and in the pill call area. Because high humidity can damage medications, authorities recommend that pharmaceutical storage rooms have relative humidity levels of 60 percent or lower.

Inmates were moving freely about in three pill call locations, with no security personnel on site. A gate and dormitory door were unsecured.

A badly damaged sink in one pill call location has very sharp edges, which could seriously injure the staff.

The Atlanta Journal-Constitution is providing this content as part of our public service mission. Please support real, local journalism by subscribing today.